As we head into a summer with COVID levels reducing, there are a collection of fun movies to see 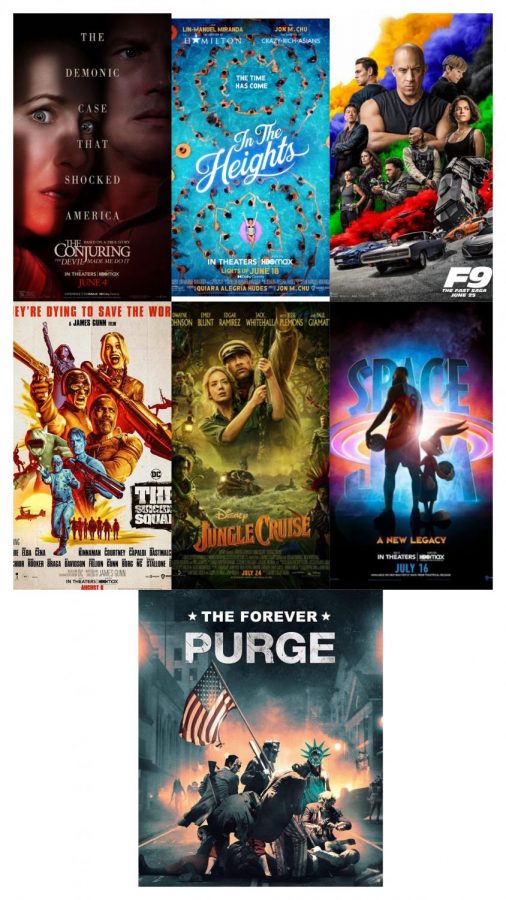 This is the third installment of The Conjuring movie series and it appears that it will also be the scariest. The chosen subtitle is not just a cheeky expression. It refers to a legitimate legal argument. Like the first two Conjuring films, The Devil Made Me Do It takes its inspiration from a real life Warren case, one that put the married couple at the center of a legal situation. For the first time ever, an American murder suspect argued that they couldn’t be found guilty of the crime, as they were demonically possessed at the time. How will the Warrens figure into this? While James Wan will not be directing this entry (the first official Conjuring film he hasn’t crafted), he still returns as a producer, and collaborates on the story with The Conjuring 2 screenwriter David Leslie Johnson-McGoldrick. Michael Chaves, fresh off The Curse of La Llorona, will be directing, using returning Conjuring-verse vets like incredible director of photography, Michael Burgess and incredible music composer, Joseph Bishara.

In the Heights was created in 2005 and was a smash hit on Broadway. The musical was co- written by Quiara Alegria Hudes and Lin-Manuel Miranda. Yes, the same Miranda of Hamilton fame. It took 18 years for Miranda to continually fight the upper brass in Hollywood for his musical to come to the big screen. All of the original songs are written by Miranda and Jon M. Chu was selected to direct this love story. The plot focuses on the Hispanic community of Manhattan’s Washington Heights. Bodega owner, Usnavi, is dating Vanessa, who works in a beauty salon. He dreams of opening a bar in his home country, the Dominican Republic. Nina loves Benny, a shy young man who has worked for Nina’s parents for years, but her father opposes their union because he wants Nina to finish her education at Stanford University. She doesn’t want her father to bankrupt himself paying for the expensive school, but her father is prepared to sell his car-service business. “Abuela” Claudia, who raised Usnavi after the death of his parents, wins $96,000 in a numbers game.

That’s right, director Justin Lin delivers the 9th installment of the Fast and Furious franchise that will scorch movie screens this coming June. The movie was set to be released last year in April, but got delayed due to COVID. The plot in this film has Vin Diesel’s character, Dom Toretto, leading a very quiet life off the grid with Letty and his son, little Brian. But, little do they know that danger always lurks just over their peaceful horizon. This time, that threat will force Dom to confront the sins of his past in order to save those he loves most. His crew joins together again to stop a world-shattering plot led by the most skilled assassin and high- performance driver they’ve ever encountered, who just happens to be Dom’s forsaken brother, Jakob (John Cena).

The Jungle Cruise is one of the original rides that was featured when the park first opened in July of 1955. For the past two years, this attraction has been receiving a behind-the-scenes makeover and has been closed to guests. To celebrate the re-opening of this landmark ride, Disney has made a film adaptation of the legendary ride starring none other than Dwayne (The Rock) Johnson. The plot begins in the early 1900s, as Dr. Lily Houghton (Emily Blunt) hires skipper Frank Wolff (Johnson) to guide her and her brother, McGregor (Jack Whitehall), down the Amazon in search of a priceless treasure — a mysterious tree with the power to heal. Their journey through uncharted territory proves full of danger at every turn: poisonous snakes, ferocious wild beasts, and another team of humans determined to find the tree first. This wild adventure film looks to be of full nonstop action.

The Forever Purge is an upcoming American dystopian action science fiction horror film directed by Everardo Gout and written and co-produced by James DeMonaco. The film stars Ana de la Reguera, Josh Lucas, Tenoch Huerta, Leven Rambin, Will Patton, and Cassidy Freeman. This is the final installment of the Purge franchise depicting the annual 12-hour span in which all crime in America, including murder, is legal. Things go awry when a group of outsiders decides to keep purging beyond the allotted time when people can break any and all laws.

25 years ago Michael Jordan made his acting debut in the original Space Jam that brought the Looney Tune gang to the big screen. The film featured special cameo appearances by Charles Barkley, Patrick Ewing and Bill Murray just to name a few. Space Jam: A New Legacy is from director Malcolm D. Lee and an innovative filmmaking team including Ryan Coogler and Maverick Carter. The film follows LeBron’s journey to rescue his youngest son Dom (Cedric Joe) after the latter becomes trapped in a virtual world by an evil Artificial Intelligence programer (Don Cheadle). Despite the pair being reunited, LeBron is told by Cheadle’s AI character that he must lead the Tune Squad to victory over the AI’s digital basketball champions, known as the Goons, before the duo can return to the real world. Be prepared for non-stop guest appearances from current NBA and motion picture stars.

Writer/director, James Gunn, has been handed the responsibility of creating this movies sequel. There probably has not been a more tight-mouthed production in Hollywood. There have been no leaks or hints as to what the plot will be about. What movie goers do have to celebrate over is the blockbuster cast that will appear in the sequel. Several of the original cast members are back, but fans will certainly enjoy all of the new characters inside of this new chapter. The Cast: Margot Robbie as Harley Quinn, Joel Kinnaman as Rick Flag, Viola Davis as Amanda Waller, Jai Courtney as Captain Boomerang, Idris Elba as Bloodsport, John Cena as Peacemaker, Peter Capaldi as The Thinker, Flula Borg as Javelin, Daniela Melchior as Ratcatcher 2, Michael Rooker as Savant, David Dastmalchian as Polka-Dot Man, Mayling Ng as Mongal, Nathan Fillion as TDK, Alica Braga as Sol Soria, Pete Davidson as Blackguard, Sean Gunn as Weasel, Joaquín Cosío as Major General Mateo Suarez, Juan Diego Botto as President General Silvio Luna, Storm Reid as Tyla, Bloodsport’s daughter, Steve Agee as John Economos, Tinashe Kajese as Flo Crawley, and Jennifer Holland as Emilia Harcourt