History is being made at Lincoln High School as sophomore, Tae Thomas, laces up her cleats for the 2021 football season. 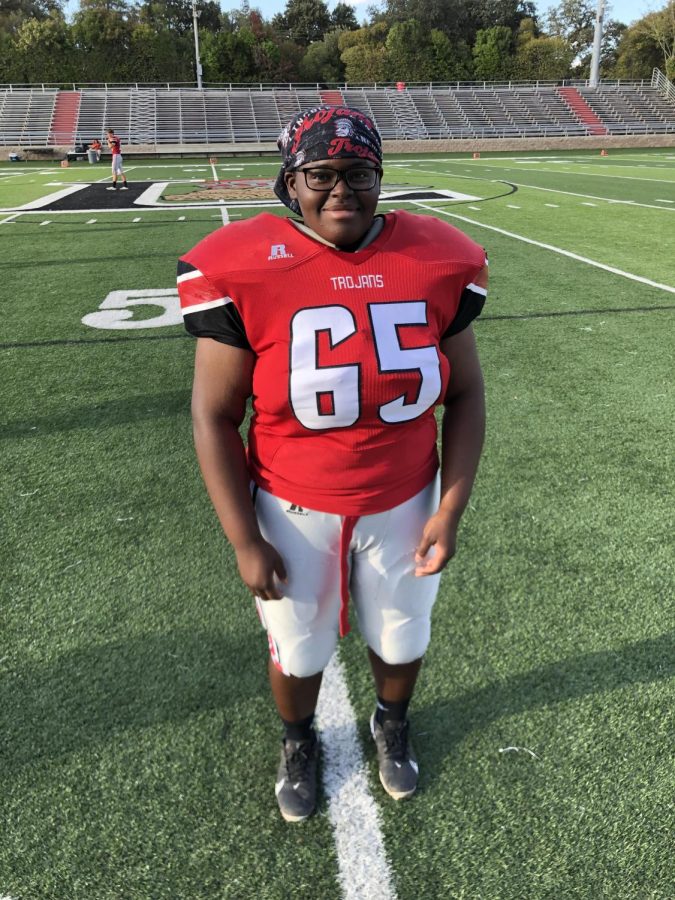 Tae Thomas is breaking down stereotypes with her quality play this season.

As this football season heads down the stretch run of Tri-City Athletic League games, the Trojan JV football family will finish the season with a female player on a Trojan roster and that hasn’t happened in over 20 years. The Trojan JV football team this year welcomed one of the few female athletes ever to play in the football program. Tae Thomas has played an important role on the 2021 team from her left guard position on offense. Tae’s talent is as real as her playing time, and her contributions have increased since game one was played at Edison High on August 20, 2021.

During her interview, Thomas talked about her sports history and what turned her into the football player that she is today. The sophomore offensive guard said that she’s been playing since the age of eight because as she said, “I wanted to hit people without getting in trouble.” The game of football became something she loved, though. She said, “As I continued to learn how to play it started getting even more fun to play.”

Thomas began her football career playing Pop Warner for the Southside Vikings from the age of eight to 12. Now, at the age of 15, this is her first season back on the gridiron and her debut as a Lincoln Trojan. Thomas is fired up for her first season at Lincoln High School, and she believes that the junior varsity team can win the TCAL crown this season. So far her coaches and teammates say that she’s been incredible on the field.

When asked about what he thought Thomas was bringing to the table, head coach Mr. Sperisen responded with, “This truly has been one of the most unique and enjoyable experiences that I have ever had.  The courage, the determination and the willingness of Tae to break down stereotypes is exciting.  We are a better group of people because Tae is a Trojan with us.”

So, Thomas’ impact on the season has obviously been impactful.

There are many people supporting her, including her family. Her family has a rich history of high school and college football, but someone who inspires Thomas the most is her cousin, who is also a female athlete that plays football. Her family fuels her to push herself, make goals, and then accomplish them. When I asked her what one of those goals was she said, “to score a touchdown.” Tae Thomas shoots for the stars and then inspires others to do the same.

This sophomore star is already looking forward to a future in football. She says that she plans to play her junior and senior year and she would like to play college ball, but that choice is ultimately up to her parents. Thomas’ work ethic and dedication could get her very far in football and Coach Matt Sperisen had this to say about her Tae’s overall impact on his team, “From day one, Tae has jumped in with both feet and she wanted to be treated no differently than her teammates. She has earned the entire respect from her teammates and coaching staff by her relentless effort and performance. Tae deserves to be playing football with us because her ability level deserves it”.

Tae wants to see more girls breaking down barriers in sports. She said she encourages this, “because being in a game is a whole different experience and it’s really fun. The work is hard, but the results are so worth it.”